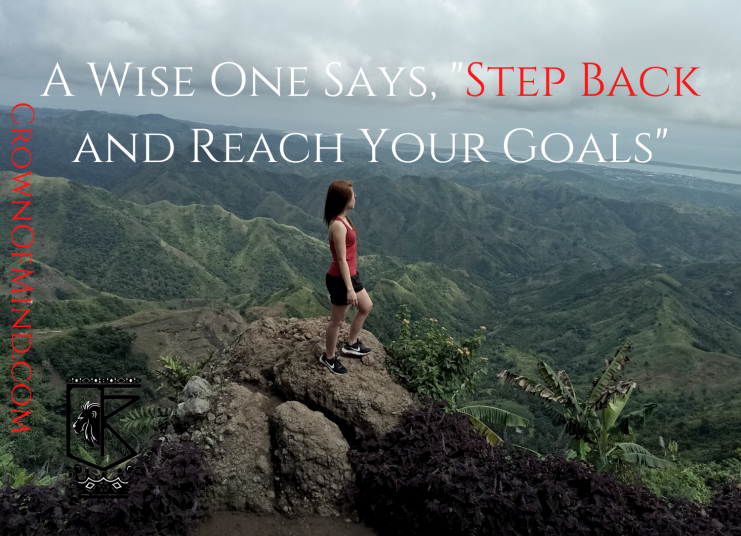 One of my event attendees [Goal Set 2020] wrote about her experience at the workshop. It’s an admirable quality to me, when someone is driven enough to immediately reflect on an experience, put the logic to practice, and processes the emotional content that may have come through. Software developer Karolina Porcioncula was gracious enough to create this piece and titled it, “Step Back to Reach Your Goals.”

I find the title to be unique and telling; it represents the workshop’s essence, where my colleague Jackie Ore and I explained self-reflection’s importance when deciding what one wants. I’d wager most people wouldn’t be able to articulate what they want when asked for two reasons:

These two can influence large goals like moving to another country and the minute, like committing to practicing an instrument for 30 minutes daily. Doesn’t matter what the scope is, the two reasons existing are consistent.

I sense Karolina used “step back,” because before leaping forward we ought to know where we’re going, what we’re leaping towards.

To know, we have to see.

To see, we have to look.

To look, we have to pay attention and make a choice.

She found the Statement of Intent concept to be valuable; the SOI is a different approach from the word affirmation speech or simply stating goals.

The SOI is about declaring the goal, here we call it “intent,” and constructing it in a way that is specific and lived out now rather than at some undetermined time.

The SOI approach operates metaphysically for this reason: we’re using time perception, language, the imagination, focus and emotions in a precise recipe that equips us to create a new timeline. This “timeline” is a vision we see for our lives that we can step into immediately.

Once we establish this timeline in the mind, we can backtrack or mentally retrace the steps that lead towards the timeline’s fullest fruition. Then, we live it.

As an example, if John Doe wanted to live in a timeline where he was physically fit, he may draw himself somewhere looking fit and hold the image. Or, he may find alternative fitness images he aims to emulate. This image is kept somewhere and fills his imagination. As this fit image resides in his consciousness, he constructs what his lifestyle is like: the people in his life, the gym routines, the training sets, his effort, the nutritional meals, the confidence he has, all of the trappings.

Based on this detailed vision, he then goes back in time to his current self and considers what has to change so he aligns himself with that vision that already exists [so far only in the imagination]. This is a form of timeline creation.

Emotionally, it can be challenging to allow oneself to experience a desire, and it’s just happening in the imagination. This is the initial block people experience when working on projects like mood or vision boards or goal sheets; the resistance to let oneself “have it” mentally quickly makes its way to the body, inhibiting the self-expression needed to bring the goal to realization.

Note: This is not endorsing the idea that every desire is worthy of entertaining or taking action on. Important to discern and apply wisdom to cultivate desires that are life-affirming rather than degenerative. The desire to abuse another living being is a vastly different vibration than to quit smoking.

Let’s look at some examples:

Each of these cases involve low self-image and worthiness. Karolina’s article reaffirms this when she says in relation to the current times, “We’re at a unique moment in time, where self-sufficiency is being tested, where the future seems bleak and paths seem to be unclear to where they are heading. It is during these times that we sometimes lose track of our goals. We forget the sense of what our real desires are.”

Karolina’s analysis shifts from the conceptual to the practical by emphasizing why steps are important. Commitment to specific actions is an initial step towards manifesting a goal, and the actual doing of those actions comes next.

Without the practicality, concepts remain in the mind, immaterial and thus half-potent. Some people call this daydreaming. While not a detriment in itself, there is a time for using the daydream power and there is a time for rolling up sleeves and dirtying the hands with physical activity.

Some in the consciousness community shun words like “discipline,” “habit” and “structure” for their implications of rigidity, being boxed in or tied down to definitions, but if we just look around, we can see nothing people-made in the physical world can exist without structure, planning or organization. For a building to be set with strong foundation, there’s engineering order [definition and logic] to follow, the same with any vehicle or other invention if it is to perform its intended function.

The true relationship for goal realization involves a marriage between the imaginative and the grounded, the yin and yang, conceptual and practical.

Karolina mentions the Pomodoro Technique as one of her favorite methods for overcoming procrastination and increasing focus.

Another point she mentions is why it’s important to take time for oneself, what’s now more commonly called self-care.

The necessity for this self-care cannot be overstated.

The meaning exists under different names; prior to this it was “balance,” “harmony,” “oneness,” being in touch with who we are at the core.

This ability to know ourselves stems from having an intimate knowledge of how we work, what and how we think and specific tools to nourish our being.

If we work hard, we also need to ensure we replenish ourselves so that we continue to deliver our highest caliber contribution. Like a glass jar full of water filling a glass cup, we’re unable to fill that cup if there is no water in the jar.

It brings attention back to the idea that foundational development is internal, and no amount of external possession or experiences will create sustainable peace and fulfillment.

While the external can be enjoyable and life-affirming, it’s ultimately fleeting, impermanent and this is why we invest effort to re-experience the external again.

Just think of your favorite movie and how many times you watched it to re-experience what it offered you.

Comparatively, inner peace is manifested from the inside out, so that when a fleeting experience is over, we do not identify with it and remain stabilized in peaceful power.

“I encourage you to take a step back, reflect and ask yourself what is that burning desire you aim to reach? What are those steps you can do to turn those ideas into actions? What is your ‘why?’ Also, don’t forget to remind yourself to celebrate small wins along the way.”

This was an inspiring read for its initiative, contemplation and how it represents the author’s drive towards continuous self-development.