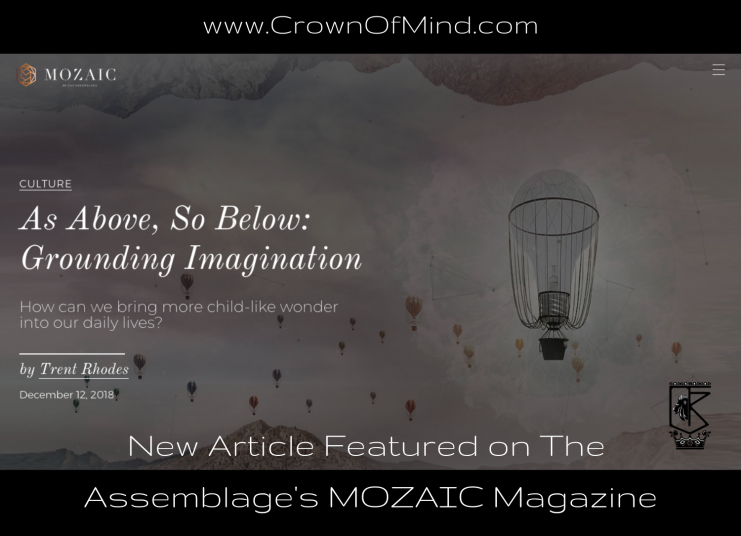 The Assemblage has been a valuable space to connect with over the past year. It’s only a year old; I joined the co-working community space during its pre-launch phase. Events, networks and offerings are some of the returns from investing time into being present there. They also happen to have an attractive-looking magazine called MOZAIC. It’s likely they won’t create a physical version. I’m fine with that; the interface is smooth, futuristic with well-chosen imagery to signal nature, consciousness and technology’s relationship.

In this piece I concentrate on grounding imagination. This comes with a few presumptions:

1. Imagination isn’t fake. It’s a real spiritual faculty and what’s conceived in it is also real. If it was fake it would be useless. We can’t create something physically real from something fake.

2. Imagination works with energetic material rather than physical material. The difference between those materials is density level and vibration. Imagination material is a faster vibration, thus we cannot physically touch it, but the mental conceptions we have can affect us emotionally.

3. As we become more skilled with this grounding art, we become more efficient with those buzzwords like “creativity,” “being a maker,” “thought leader,” “success,” “manifestation,” “we create our reality.”

[…] you’re out with a friend and during the conversation a mental light bulb switches on. You receive the Aha moment, a tidal wave of inspiration, a deep energy rush. For the first time in […]

[…] As Above So Below, when your body can cleanse so can your spirit. Elder can support the body to become “regular.” I typically use the syrup form and put a few drops into my evening power drink. Source. […]

Treatise on the Chakra Vampire - CrownOfMind.Com

[…] with was not always here; the design originated first from someone or many people’s minds [imagination], then the physical resources were organized in a way to produce what’s called a MacBook […]

A Wise One Says, “Step Back and Reach Your Goals” - CrownOfMind.Com

[…] SOI approach operates metaphysically for this reason: we’re using time perception, language, the imagination, focus and emotions in a precise recipe that equips us to create a new timeline. This […]