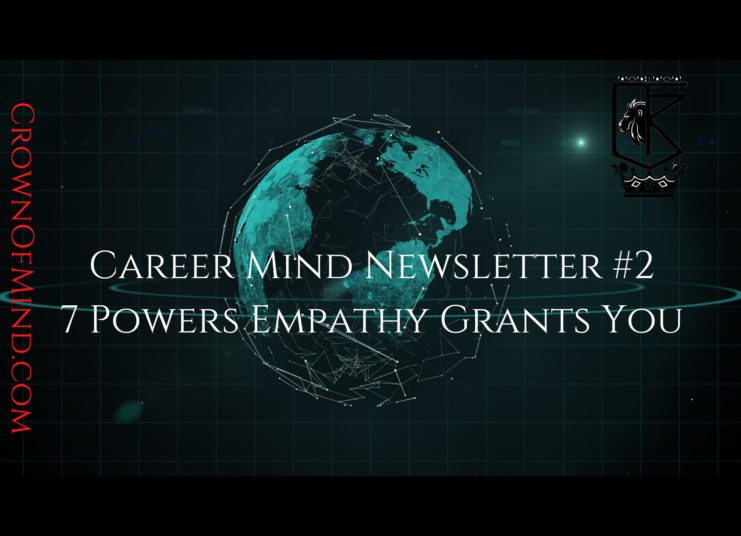 Thoughts that come to mind with the word “empathy?”

Generally they tend to be: being in touch with feelings, being sensitive. Caring about others’ feelings. Emotional overwhelm. Too sensitive to the environment.

Content creators who adopt the empath title also give much focus to the feelings space, how to recognize them and guard from being overly sensitive.

(1) Self-regulation. The ability to dial energy up and down when necessary. There are several studies showing how this kind of self-control contributes to long-term goal-achievement.

A robust self-regulation power implies knowing what to regulate. This could be anything from calming down nerves during an interview to delaying gratification by not purchasing an item.

It’s this very power that many of our corporate advertisers hope you never develop.

When you were at university and the banks held table displays about their offerings, how easy it was to sign up for a credit card right? And how simple it was to make that first purchase with it. The swift experience swiping with a card bypasses the extra effort (and potential reconsideration) to take out and count cash.

Fast-forward and our economy’s current household debt level is a partial consequence of an economic environment that doesn’t emphasize financial delayed gratification. Companies know the ways to poke and prod customers’ emotional cues resulting in that next discretionary item purchase put on credit when it could’ve waited.

Sensitivity, another self-regulation quality is acquired through emotional awareness.

“Sensitivity” here is different from the usual meaning ascribed to it, typically associated with being fragile or unstable, easily hurt. A sensitive person isn’t automatically a wounded individual who needs coddling.

This sensitivity is about awareness of the information coming through the senses. You just don’t miss much. Our civilization’s prolific scientists, programmers, philosophers, businesspeople, doctors, lawyers and thinkers in general are acutely sensitive. It’s what enables them to notice what people generally overlook and make use of it.

Someone who is sensitive and more susceptible to feelings’ ebbs and flows hasn’t yet learned to effectively self-regulate; it can be learned.

(2) Discerning feelings from emotions. You’re able to sift through the difference between feelings and emotions.

Emotions are generally more stable scaling on a spectrum from love to fear, truly the only two emotions.

States we call anger, hate, happiness, joy, jealousy, determined and the like: these are feelings, often more fleeting and shifting multiple times throughout a day.

A person could experience happiness receiving a gift from a friend in the morning, anger from receiving the wrong restaurant order in the afternoon and sleepy at night’s end from having a vigorous day. Amidst these fluctuations the person’s overall paradigm for living emerges either from a love or fear vibration.

The states we call “positive” source from the love emotion as they bring is closer to connection or wholeness, while the more destructive feelings manifest from fear and cause separation (is your first inclination to move toward or stay away from something you’re afraid of?)

Feelings’ fleeting nature reveals why they’re unreliable to follow long-term. As a leader responsible either for people or projects, the last thing you want to do is adopt a reactive action style. If out of control, feelings can possess a mind to a level where impulsive action is taken, to be regretted later.

Empathy shows us that feelings provide information about an experience and our perception of it. Cross-team collaboration shows you how different department members relate to the same objective.

A work project you’re given might make you nervous while your direct peer feels excited. The project is the same so the X factor is you and how you perceive it.

Empathy equips you with the ability to understand these intangible states carry energy that can be used for advantage.

If you can combine this awareness with language, you’ll be able to accurately identify which states are expressed within and in others and how to appropriately work with them.

(3) Situational awareness. Some call this being able to “read the room” or understand social cues.

Imagine a professional attending a networking event and quickly recognizing someone a few paces away who appears receptive to conversation.

If you’re there to develop more collaborative relationships and overhear a chat between two people about your area of expertise, the timing speaks to you as the moment to join the dialogue.

You’d apply a self-regulation method to calm down about talking to people you don’t know, and your sensitivity would help you understand more about the two.

If you’re in a team meeting and the topic is focused on one subject, you sense there’s an opening where your input would make the most sense; it would at that moment rather than later on so you invite it into the discussion.

The “situation” in this empathic awareness involves as many contexts as can be acknowledged: the people, their interests, the environment, the theme, time along with what action you intend to take. When this is sharp, you simply have effective aim on what to say or do and how to deliver in the moment where it makes the most sense.

When reading the room properly, you know what to do and execute. It’s intuition.

Skilled awareness can result in building stronger, faster rapport in all kinds of meetings. For career settings, this rapport can progress to network value where you receive invitations or even next interview rounds.

(4) Enhanced leadership. Empathy will continue to be the special characteristic that distinguishes leaders.

When you put kids into a group to play, you may notice the leaders naturally emerge. It’s because leadership is an energy comprising of traits that can be honed. There may be one or a few among the children; some carry the energy of modeling as an example others move to observe as a standard while others are fine with being supportive.

Leadership is about having a vision and offering a path towards its realization.

If the leader has people to lead, this is often done by gaining buy-in (convincing, persuading, inspiring, influencing) to walk on that path because they don’t have to. They can disagree with it and leave.

To inspire those to follow the vision, the leader usually has to provide a model, be an example representing the essence of what it takes to achieve the vision.

Would you follow a fitness trainer’s guidance if the trainer was obese? Or are they more influential if they used to be obese and was now fit enough to show you the path?

How about a leader who constantly lost their composure in a crisis? Would you be comfortable following that leader’s vision?

When a leader lacks this modeling capability, the default mode is coercion, deceit or force. Tyranny, no empathy necessary.

Empathy augments leadership with the insight to understand people on the path in various layers. Through building rapport and expressing genuine interest in the people involved, the members’ inspiration grows to support the vision.

(5) Win-win problem-solving. Cultivated empathy enables people to arrive at conclusions that can benefit both or all parties involved.

In a zero-sum paradigm, if you win the other must lose. If you receive, it’s because you had to take what someone else had. The sense there’s scarcity may motivate people to take actions they normally wouldn’t if abundance was foundational.

In competitive environments like chess or soccer, a side winning and losing is fundamental around the scope of being a mature competitor no matter the outcome.

But in the work environment, trying to climb in status by destroying others creates room for a heavy fall.

Hoarding enemies eventually results in competitive clutter, frequent back-watching. Sleeping with one career eye open. Ponder on the excessive stress of this.

Constant conflict also displays a lack of understanding for how to engage personalities and views different from one’s own.

Can you start off in disagreement and arrive at a meeting of the minds? Can you skillfully agree to disagree and still work with each other on the same team?

I enjoy watching the Star Trek series for examples like this. Often the Enterprise engages species whose views or ways on life differ.

Sometimes there’s a military conflict but the end goal always focuses on how to mutually get along in this vast space with different space-faring cultures. It involves research, tact and some fundamental interest in communicating to others in relatable ways. That’s all empathy at work.

(6) Enhanced listening. If there’s one skill I see dwindling today it’s active listening. Would you agree?

Passive listening is all today’s craze. We can have three screens on and passively tend to each of them.

Some people can read while wearing headphones listening to music.

Some walk with the smartphone buried in face while peers talk to them.

But active listening is another skill set. At its core is empathy.

The “active” element in listening is focused consciousness on the other person.

You hear what they’re saying, feel the tonality and if visible see the full gesture profile. Like a dance you are so engaged you respond in sync rather than to provoke a preconceived outcome.

Have you ever experienced when someone truly gave you their full attention? You might’ve felt like the most special person at the time, fully seen for who you are one might say. It’s a different communication plane.

(7) Diplomacy. This skill is associated with politics but spans any domain where people relations are necessary to arrive at an outcome.

If you had any negotiation training you know how you say something is just as important as what you say. It’s an art.

Two people can deliver the same message in different ways and one may achieve more success than the other.

In your presentation there may be five ways to share a concept but they’re not equal in potency. Which would would be best to use?

Some may say that you should be able to say whatever you want, however you want and achieve the same outcome and that’s the end of it.

But this philosophy depends on the kind of outcome you’re going for. What’s your intent? Does the situation call for a brute force approach or more selectivity? What’s at stake?

Would you tell your client he’s a fool for not understanding a feature in your software application, or would you discover why he doesn’t understand it and then help to clarify? The choice is yours.

Would you name-call a peer in front of an audience for something they said or would you pull that teammate aside and have a private conversation? The choice is yours; empathy would offer you insight on the context of what’s happening and the space to select an optimal style for that moment.

Thoughts on these 7? Share your insight in the comments. Be Well.