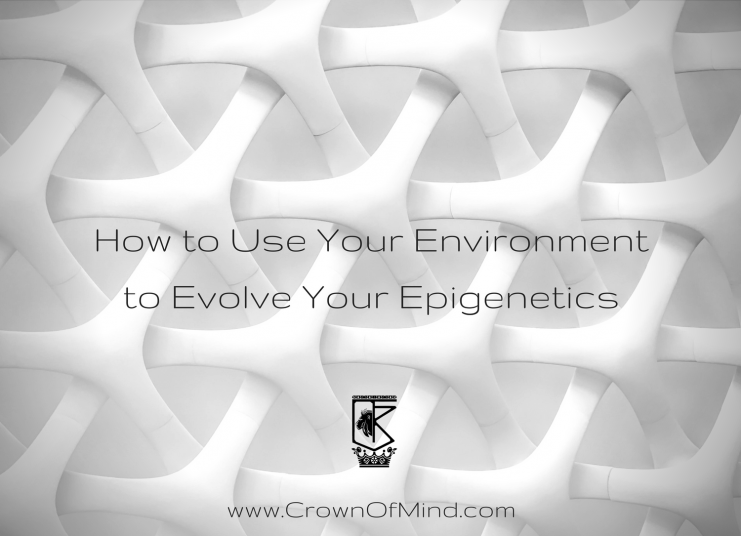 Our immediate environment influences us daily, touching our senses and mingling with our mental states. Environment is the facilitator for epigenetic changes we experience. What we think, feel, see, hear, touch, taste and smell alter us each moment. By overtly focusing on magnanimous steps, we can overlook the more immediate ways to elevate our consciousness through the senses.

I invested years into recognizing this feedback process of adapting TO the environment and adapting THE environment to stimulate internal change. The changes occurring may or may not be immediate. Everyone’s developmental path differs, so while John Doe’s understanding of something can spike in two days, Jane’s might take a week for the same experience. Variables include current soul level, health, emotions, mindset, many.

I incorporated this unknowingly when younger. With action figures and creating stories. I tore pages out of those black & white old-school notebooks to draw out comics back in elementary school. The comics were below amateur; mostly I enjoyed drawing Power Rangers and Street Fighter characters, occasionally the X-Men. I wrote their scripts, had characters die, marry, experience jealousy, go to wars. Plenty of complicated drama we tend to see in TV series today. Perhaps this was a precursor to my enjoyment for film and television with complex characters. Screenings that have meaning, something for me to take away from it.

I enjoyed putting together costumes during this time; my friends and I would act out similar character plots from the stories I wrote. Often I “directed” these stories by guiding who does what, what happens next. I orchestrated the kind of world we’d be doing battle in, who the villain was to be. Plenty of informal practice for molding my environment.

This skill developed during my introductory years in martial training. I focused more on writing stories with the Street Fighter characters and watched the animated movie dozens of times. I also would save the best pictures from browsing the Internet depicting martial arts practices. And anime.

Let’s see…this was about 10 to 13 years old…I was using the slow 28k dial-up modem at the time. At the time 56k was the fastest and 128k was elite. Imagine the amount of time invested in searching for just the right image.

The pictures I saved I’d collage them on Microsoft Word, match them up neatly. Those sites that thought they could block me from saving by turning the option off? I discovered the screenshot. Print-screen button took care of that. They were coordinated on the page based on color and the characters, almost as if they were telling their own story. Then, print.

What did I do with those images? I’d stare at them often. Or they would remain in close proximity depending on what I was doing. I kept an eye on them.

This was an as-yet-unaware alchemical process that operated on my system epigenetically.

The more focus I gave to the images, the deeper I perceived their meanings. The deeper the perceived meaning, the more their archetypal energies I absorbed. The more I absorbed their energies, the more I embodied them. At the time, I just took the action based on intuition. Because I wanted to do it. It felt natural. This was a form of education.

This is no different then meditating on the qualities of Shiva and Shakti through their pictorial representations. When we see the symbology of Shiva-Shakti and meditate on those qualities, we become one with them. We become them. This means Shiva-Shakti’s qualities are already within us to manifest. The process just brings them out.

Recognizing this on some level at the younger ages, I was able to “download” knowledge from watching cinema. In a series, I could “download” the understanding a character came to know by watching the show and following the development. These “entertainments” weren’t mere entertainment for me.

They were part of a quiet school, that Invisible College mystery school we end up being initiated into the moment we start to question reality. The scenarios acted as replicas that could occur in the physical world; I was making these replications with the action figures and comics at the start. The purpose of my book SAGE Mind is about this type of mystery school education.

I learned this too was alchemical technology of the imagination: we need not have to physically experience something to acquire the understanding of it, because our imagination has the power to manifest the experience in the mind. We respond to it just as if it was taking place in the physical world.

This knowledge expanded into the mainstream with athletes taking advantage of imaginative play to amplify their performances. They sit with eyes closed and rehearse their performance repeatedly. The brain doesn’t recognize the difference between the “in there” and the “out here.”

In Chopra’s Super Genes, he points out how a sudden mental shift can create a rise in energy that can be visible in the eyes by another.

I deployed this technology gleefully. The downloads amplified my understanding of the world. Mistakes I made in the physical world required minimal repetition to “get the message.”

Fast-forward years later, here we are in this post.

Epigenetics is acknowledged in science. Quantum physics continues to confirm what the ancients knew about the mind and reality. The U.S. culture is quickly being fueled simultaneously by agendas touting collapse, people awakening to more spiritual callings and the planet undergoing self-corrections to “fix” the alterations humanity continues to make on her.

If you resonate with this information down to your cells, it’s you.

Let’s go a bit deeper into self-organizing the environment. Here are areas to look at:

-Images: What pictures do you see daily? What images are in your rooms? What pictures are you seeing on your phone? Do they represent your highest development? Choose those that charge up your life force. You won’t forget them.

-Shows: TV shows, movies, films. Are you watching content that challenges you to think more expansively? Do they stimulate your creativity? Are they serving your highest development? I watch a range of genres from Sci-Fi, drama, historical to horror, mystery and psychological thriller. Like books, each of these genres contain gems for learning if approached with an open mind.

-Environments: What establishments do you tend to travel to? What type of people tend to frequent the spaces you do? Are they challenging you to grow?

-Music: What do you tend to listen to? Examine the lyrics; are they words you resonate with? Is the music serving your highest development?

-Food: What are you eating? Are you selective with your meals? Are you eating to serve your highest development? Are you selective with your drinks? I recognized just eating food was not going to cut it for the body in today’s society. Soils are depleted of mineral content. There is trickery in the language use for ingredients; it is not what it seems. This implies something more than just eating food is required. I’ve incorporated herbs and “super foods” into my dietary intake since undergrad.

-Oils; Flowers; Scents: Scents have direct access to our memory centers; they tap the limbic system, evoking emotions that arouse the life force in specific ways. I anoint my body with frankincense, myrrh and gold each night before sleep and after showering. Also anoint before the leaving the house.

-Clothing; Structures; People / Contacts / Connections: Feel of fabric, textures. “Touch” in the sense of people doesn’t have to mean physically, but mental connection. Connection with another forms a bond where people are “on the same page,” “vibing” or have a “meeting of the minds.” These speak of a connection that involves energy.

-Clothing & Functions; Accessories; Color, Vibrations that Activate Archetypes: We can choose to be negligent about this area under the guise that how we clothe ourselves is of no consequence. But what we choose to wear is an external representation of what we’re reflecting internally. We “clothe” ourselves with impeccable personal hygiene, for example, when we recognize our bodily temple is one to be valued in such a way. Similarly, we choose clothes that symbolize our internal state. This doesn’t mean the monetary value of the clothing, but the quality and cleanliness (or lack of), as well as the color, texture and fabric selection.

[…] Think about it. A child is born into the world without any imposed beliefs. She is essentially free, and by being free she’s limitless in thought. As she grows, she experiences her first boundaries and laws. Instinctively she learns that fire can burn her, water can feel cold, the sun feels warm, and when she’s hungry she needs to eat. Growing into a natural scientist. […]

3 Realizations I Gained from Ghostwriting - CrownOfMind.Com

[…] but also don’t repeat negative habits that might’ve passed down. We end up shifting epigenetically, so that our genetic expression differs from the ancestral trends, consequently creating a new […]