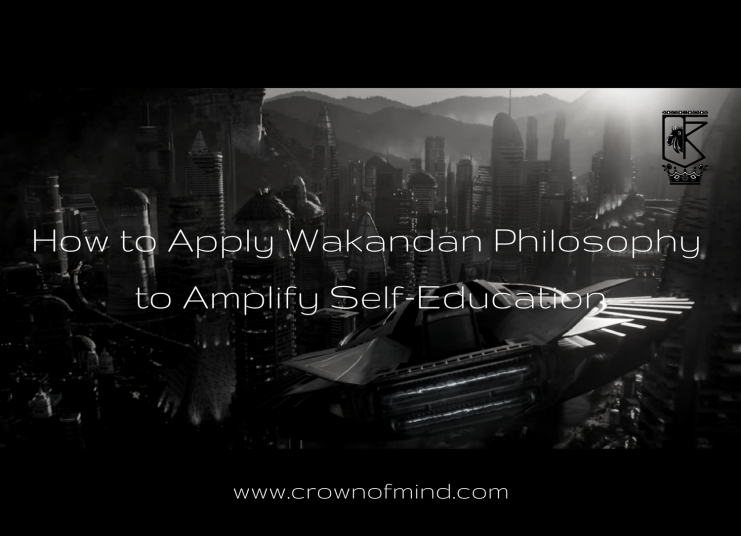 The Black Panther movie needs no building up from this blog. I watched it twice and (don’t worry; no spoilers in this piece) enjoyed its story, nuances and found the work to be a valuable addition to the Panther’s universe, broadly introduced in the Avengers movie.

If you haven’t watched it, I highly recommend, as it introduces a new environment in the Marvel cinematic universe unlike the others so far. Deeper than its visual appeal, I want to assist you in seeing how one could make use of, to reverse-engineer a number of cultural practices seen in the land of Wakanda that directly relate to the autodidact, the self-taught. Once again, you’re safe. No spoilers in this piece.

We’re going to exclude the character plot lines and story and look at the raw civilization.

Wakanda is an African nation that was influenced by a cosmic substance/metal called vibranium thousands of years ago. This substance influenced their soils and became the foundation of its development over millennia. What makes this civilization unique is its maintenance of and evolution of this material, transforming it into a number of advanced technologies that far exceed the rest of the planet. What is even more impressive is its length of time in isolation. It is this isolation that enabled it to harness the kind of citizenry capable of creating what it possesses.

Do we explore this now just because the movie came out? I’m not about posting just what’s trendy; I’ve been studying the Wakandan concept for a few years analyzing how their way of life was designed and how I can incorporate it into my personal journey. The movie release now gives people a motion-picture visual of what I am about to describe. As a literary artist, I create using this medium, the power of words. As a scientist, I leave no stone un-turned when it comes to study and application. The fact that this is a fictionalized civilization has no bearing on the truths that can be extracted from its depiction.

Wakanda’s philosophy emphasizes a system based in a blend of traditional culture, advanced technology, science and spiritual connection. This combination permeating throughout an entire civilization leads to not just advancements in what the people can produce, but how they think, feel and live daily. Here we will explore some aspects of this philosophy and how it can empower your own evolution.

Wakanda was in Isolation

The nation was in isolation for thousands of years harnessing the power of vibranium. It had no external interference. No outside nation conquered it or influenced its development through ambassadors. The amount of time they had to focus on growth undisturbed was one of the critical factors enabling it to reach its current level.

For You: It can be to your benefit to take periods of solitude, so that you can focus strictly on what you’re aiming to manifest. Deflecting external influences, cutting off distractions will free up your own energy so that more of it can be devoted to your goals. Be ready: when you begin this solitude time, more attempts to distract you will surface. This is the natural resistance force of physics asking you to exercise your discipline and say, “No, I have something to take care of.” “No, I’m not going to hang out tonight. Taking care of a priority.”

Wakanda Mastered the Art of Cloaking

Wakandan technology can render people and material invisible. As you’ll see in the movie, this feature proved to be essential in its isolation strategy. Not only was their land protected this way, they deliberately gave off the reputation of a third-world country. This was how the world viewed them for centuries.

A combination of humility, strength to restrain one’s power and wisdom enabled Wakandans to travel throughout the world unnoticed. Imagine having keys to solve numerous problems in mundane life and you are poised to not blurt that out to everyone you meet.

For You: As you advance in spiritual initiations you will come into knowledge not just through texts or teachers but your own internal connection to the divine, the gnosis or direct experience of understanding. This is truly power, as you don’t need an external point of reference to tell you what you know. Life itself will provide the opportunities to test and the evidence will be reflected back to you as you become more unified within, in harmony (Ma’at) in your living. That power will be tempting for you to shout out, to want to tell everyone what you know.

The need to tell others what you know combined with the need to receive some type of reward stems from the ego. “Ego” is a word used to sum up our identity. This identity can confer useful applications, like titles of rank in tenure or knowledge or knowing who the parents are. However it manifests chaos in our lives when we associate our whole being with that particular identity.

When an ego is so inflated, we become susceptible to feelings of resentment and need to defend any alternative view of that identity.

Someone in possession of great knowledge for example, yet still obsessed with an ego-desire may feel the need to destroy anyone who poses a perceived challenge to that identity.

Cloaking is an art of being grounded enough to move within environments without everyone being pushed to know who you are or what you’re about.

If we define “technology” as the application of knowledge, then technology spans more than just the common notions of physical, mechanical forms. There is also inner technology. When we work with spiritual practices we are in fact accessing spiritual technology.

Wakanda is known (maybe not everywhere) for its advanced technology involving vibranium. But there is also herbal technology that enables their herbalists to create a potent drink that imbues the receiver with the powers of the panther. There’s also spiritual technology enabling certain members of the royal lines, particularly the Panther himself to connect with the ancestors and receive knowledge from them. There’s also the spiritual technologies of meditation, dance and martial arts that empower the people to harness their inner potential.

For You: Within your own vessel you too have potential to harness these types of technologies. Expand your definition of the word and you’ll see that our spirits house multiple functions and powers that can be guided to manifest.

Unlike the patterns we tend to see in our world, Wakanda’s technological emergence was not at the cost of their spirituality. On the contrary, they continued to advance spiritually and technologically, forming a blend of science and spirit. Were you to take the vibranium out of the equation, the nation would still have their spirituality intact albeit expressed minus what vibranium offers. The core of how they live with what they have is based on principles grounded in spiritual truths. This means qualities such as greed, malice, empire domination and jealousy are not held as the highest virtues in Wakanda. Consequently, the nation’s citizens grow to strive towards different ideals.

For You: Examine your motives behind your actions. Are you driven to success out of greed or malicious intent? Are you intensely focused on becoming greater because of what someone told you when you were young, and you solely live to prove them wrong? Does your value system include destroying people and things at all costs to reach your ends?

In both the movie and original canon, Wakandan culture is abundant with references to the ancestors. It reflects a consistent awareness that there were people on the planet prior to, and they still have presence due to the line of procreation and passing down of knowledge both through formal teachings and in the bloodline.

For You: Realize that “the ancestors” exist within the very cells of your being, because lineage is created by passing on genes from one generation to the next. Housed within that DNA is the knowledge from every being connected in that line (this implies billions of years of DNA and the truth that we are all connected at the source). Therefore, utilizing the spiritual technology mentioned earlier (and sometimes it can occur spontaneously) you have the ability to “speak” with your ancestors by tuning into the knowledge brought to awareness from the spirit.

Not shown much in the movie, the canon explains that Wakanda has a strategy of sending out their young to study abroad, acquiring advanced degrees and education and then returning to Wakanda to apply that knowledge in the land. They invest for their children to travel throughout the world for their studies. All the brainpower, technology and values remain within the nation, evolving with each generation.

Based on this model and overall civilization advancement, we can presume the base intelligence is on average much higher than the rest of the world. To understand Wakandan technology, spirituality and the culture infused by them would require an above-average level of intellect.

For You: Be a continuous learner. Become a student who can transform any life experience into a classroom, an autodidact. When you learn something, bring it back to the Self and discover how to integrate it into your developing cosmology (your holistic perspective of reality).

These are just a few points you can reverse-engineer to speed up your self-education. Enjoy the process. And, enjoy the movie.