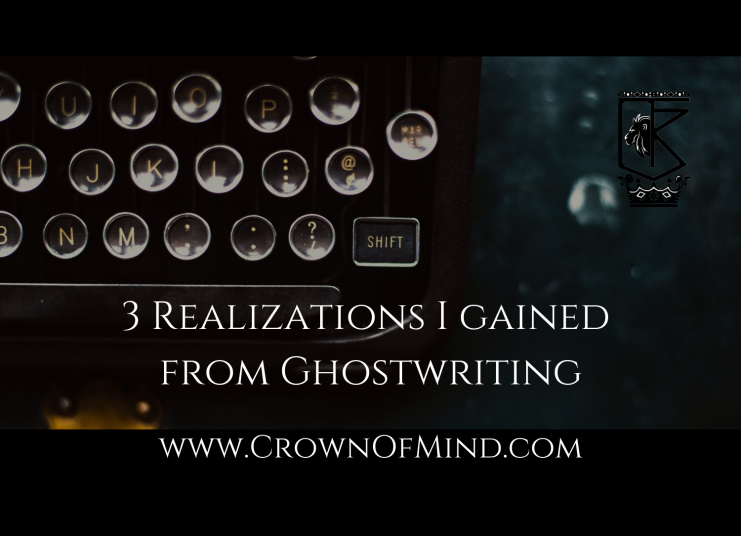 For those who may not know, ghostwriting is a style where the writer is unknown, while there may be a public author.

A politician for example, who may have valuable ideas but doesn’t have the time or writing skill, may seek out a skilled writer to pen a book. The “author” on paper is seen to be the politician while there was a true author in the background likely receiving quiet compensation. I suspect this occurs often with the memoir-style books we see of famous figures. It’s possible that not all, but some figures could have brought in someone who can better articulate their ideas to publish their story.

We also have robot writers acting as a new type of ghostwriter, producing rapid copy for large institutions that tend to put out multiple articles per day online.

I’ve not written for any politicians but have extensive experience freelance ghostwriting for a number of businesses, coaches and people who generally just want to have their ideas expressed in an optimal way.

One that comes to mind is a love letter.

Past Client: the woman wanted her then-ex to join her on a trip so they could become friends. The ex knew she left him for another guy and didn’t want to have anything to do with her. I told her this would be unlikely given how this situation developed, and if he were a sane man he’d keep his distance. She still wanted to try it. I don’t know the outcome.

[Hint: a “love letter” given when there isn’t any more love in that relationship will likely be unsuccessful.]

Having written for business websites, product descriptions, summaries, quotes and thank you notes for customer purchases among other styles, I can say it’s been vigorous, useful exercise for cultivating the ability to see as others see, to observe from others’ eyes.

Metaphysically, this would be called the naazir, or the watcher, a capacity to understand another without having to go through the direct experience. Learning by observation instead of physically “being in it to know it.”

Example: A young boy observes his peers picking up the vaping habit. He sees they feel cool and others respond to them positively. They receive more attention from the girls. The boys now have “swag.” He wants some of that swag too, and considered vaping with them. Over the weeks though, some of the boys got sick.

Some went to the ER for treatment.

The young boy saw on the news the increasing hospital cases linked to vaping. After learning more about it and seeing his peers’ outcomes, he decided he will not vape.

The young boy didn’t have to physically “be in it to know it.”

He observed and altered his behavior accordingly.

Some call this empathy.

I say naazir goes deeper than empathy. To empathize with someone is to understand one, but we can still be liable to fall into the same traps they might’ve; there’s a connection without actually learning to do differently from what was felt.

Someone may feel the heartbreak pain another is going through, even capable of consoling, but that doesn’t automatically prevent one from exhibiting similar errors that end up causing their own.

Being a naazir is to see the lessons, the pitfalls and to become capable of absorbing that understanding so the mistakes are avoided.

When we demonstrate this talent, we end up breaking destructive patterns in family histories; we not only come to an understanding, but also don’t repeat negative habits that might’ve passed down. We end up shifting epigenetically, so that our genetic expression differs from the ancestral trends, consequently creating a new expression pathway.

Ghostwriting is a metaphysical tool that cultivates the naazir power.

The writer is challenged to see from different perspectives: characters, time periods, personalities, shifts. In the process, the metaphysical-inclined writer can use the experience for entering various realities mentally, living out the outcomes and gaining applicable knowledge for the present.

1. There is a greater need for writers despite the digitization of things.

Seems the perception is that writing is a dying art form (shown by where the money flows. For professions, “writer” is quite low compared to emerging roles in STEM) but this is far from truth.

Advertisements, marketing, commercials and dialogue, anything needed to communicate a message inevitably uses the written word, either in the print or orally. Writing isn’t going anywhere and high-quality, consciousness-impacting writing is rarer. If this wasn’t the case, then people wouldn’t pay other people to write their ideas.

2. Not everyone wants to or has talent-level access to writing.

Different strokes for different folks one can say. The talent distribution in civilizations is vast, and even people with the same talents manifest them at diverse strength degrees.

Some people just are not interested in developing writing skill. Others may have the talent dormant, never awakened.

Blend these factors and you can see the ghostwriter’s value.

3. Ghostwriting is valuable exercise for imagination and mental agility.

As mentioned, this is a ghostwriting positive side effect and can be augmented when consciously done.

If you’re writing a short story for someone, don’t just write it; be intentional about exploring the environment in imagination.

Play with the various ways the characters can interact. Examine the experiences they go through and how they relate to you currently.

Just as you would experience an insight spark from reading a fiction novel, the insight you gain from writing for another can be as valuable.

Writing skills mean the writer is to write down their thoughts/ideas/opinions/facts/stories etc in a manner that makes their thoughts clear and comprehensible to the reader. Good writing needs to have good vocabulary, correct grammar and spellings along with perfect punctuation.thnak for your information I will come back and read more.