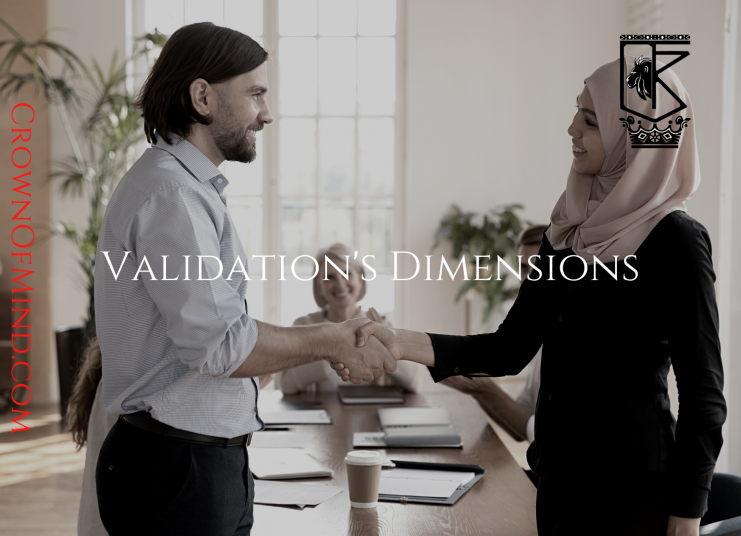 Evidence of this desire-validation is more pervasive as we become a more digitally-oriented species in this Age. It’s subtle, yet if we examine with a critical eye we can see just how worldly the imperative for the external world to acknowledge, to justify, to be agreeable is now.

One of the sources blamed tends to be social media; it’s one of the most lethal technologies for magnifying people’s need to have others want them, sometimes to extreme degrees that impact mental-emotional well-being. It can cause irrevocable damage like self-harm or suicide. The examples are rampant.

Despite this knowledge, the hamster wheel continues. Samsara, that spiritual suffering cycle continues in a new form laced with WiFi Internet access, apps and content creation.

Validation: The Light Side

I want to redirect attention here to the importance of a 360-degree perspective. To cover a topic, the more ways we can perceive it, the more access we have to understand it. The more language we can use to describe it. The more possibilities we develop to engage it.

Validation as an energy in itself then wouldn’t be negative.

Regarding children for example, it is important for the youth to receive positive validation, different from spoiling.

Simple words like, “You’re getting good at this. Keep up the work and you’ll become even better,” is validating. Empowering access codes for a young one to receive.

A simple acknowledgement like this given at the right time, in the right tone while that child is in the right mental state could open up a new world of potentiality by inspiring some kind of flashlight insight. The child could be put on his journey just by hearing those words.

When a friend shows presence and support, it is validating to acknowledge that friend’s presence, what that friend means to someone in that moment. The acknowledgment can strengthen the friendship bond.

When a fiancé acknowledges a quality in her mate unsolicited, simply because she wants him to hear it, that can strengthen the bond. That too is validation.

When two people who don’t know each other hold the door for each other and say, “Thank you,” that too is validation. While they may never meet again, they acknowledge to each other the positive energy that can continue circulating; they may end up passing it on.

From this angle, validation and appreciation can go well together. There’s a relationship that can elevate connection among people.

Shifting perspective, we then can see that the energy itself is not problematic, but the excessive, obsessive desire for its outcomes is.

Validation – The Blind Side

When validation becomes a drug, we then see what’s manifesting: performative behavior for the likes, comments, cash and claims of being wanted.

In the obsessive energy, there are several dynamics happening. One, the performer becomes an energetic vampire who feeds off of the incoming expressions of desire through the social media tools and in-person experiences.

Since it’s a drug, more is required to experience the same dopamine high.

Eventually this becomes no longer about people but about the energy; the people become disposable. With time, people who once were full of empathic abundance become hollowed out, empty, unable to pair-bond.

It’s science that our endocrine system responds when we’re complimented; when someone appreciates us, our blood flows stronger, we release endorphins. Some people blush. It feels pleasant to be mirrored by another being, when someone says in their own way, “I see you and I appreciate what I see.”

It’s partially why people who have tight-knit bonds (with quality people not necessarily a lot of people) tend to live longer and in better health. It’s also why couples who genuinely appreciate each other tend to have longer lifespans.

The second dynamic taking place in validation-obsessive energy is the person doing the obsessing, the feeder, also becomes vampiric.


Obsession itself becomes a drug that has to continue otherwise there is no purpose.

Even though the person isn’t receiving authentic validation, the idea of giving it to another becomes enough that taking on this type of psychological enslavement becomes justified.

So two vampires are created in an obsessive-validation energy.

What’s Society to Do About Validation?

Several steps can be taken. Instead of tackling this from the top down however, looking outwardly for some organization or movement to do the work, as with most initiatives, this is more about the individual first.

One person who embodies authentic appreciation, genuinely giving it and capable of healthy receiving, can create a ripple effect within one’s own immediate environment. If each person did that, the frequency in the community would change, then the society’s frequency would change.

A few recommendations to increase appreciation:

Lose the Celebrity Worship. Given how sensationalized western culture is, this one may be one of the most difficult to extinguish. There’s a clear difference between admiration for a person’s qualities or capabilities and worship.

With admiration, we can acknowledge a person we don’t know is good at something. A high-skill demonstration.

With celebrity worship, we create blinders that urge us to only focus on committing energy to people we don’t know, we likely will never know and who have no idea we exist.

The pride of being a fanboy or fangirl becomes stronger than pride for having worthy people in our lives. When the grass appears greener on the other side, we end up neglecting our own land.

Rather than obsess over some musical artist’s persona (that’s been built up by teams of image specialists), we can channel that appreciation-desire towards people in our lives who we do know, who also have positive qualities. People who invested in life experiences with us. This can eliminate the potential for taking people in our lives for granted.

Take It Slow. Whatever it is. Process or with people, establish a renewed commitment to slowing down and giving the best of attention to whatever the focus is to be.

It doesn’t take much to notice the perception shift; if you usually eat a piece of chocolate fast thinking nothing of it because you can always have it, consciously choose to eat a smaller piece, and then eat that small piece slower. Actually look at the chocolate piece you’re eating. Have you ever looked at it before or just popped it in your mouth?

Turn it around so you can see all of its angles. When you allow your palette to taste, don’t chew. Allow yourself to experience the flavor. I emphasis this “allow” energy because it represents permission you’re giving to yourself. That it’s okay to take it slow.

This may produce some annoyance at first if not used to it; your subconscious at that stage wants to run its program, which is to rush it down and move on to the next thing. This will reprogram your spirit to give proper attention to a task.

With people, also take it slow. Commit new energy to listening to what someone is saying, the words used, the tones applied, body language.

Can you hear the meaning behind the words used?

The double-dynamic in any conversation is: What’s being said and what’s meant?

There’s a physical and spiritual dialogue happening at the same time. There’s an As Above, So Below in every experience.

Without genuine appreciation energy, you won’t be able to move beyond the literal words a person says. Interactions won’t evolve beyond the superficial.

Acknowledge the smaller gestures while you swoon over wanting grand performances.

Delay Gratification. Another that exists as the anti in western society, consciously spreading out or establishing a discipline around your enjoyments can strengthen appreciation when you actually experience them.

Think of your favorite food and decide to not have it for a few weeks. When you return to it, your tastebuds may become more acute. Apply the philosophy to other realms. Entertainment. Socializing.

The more cultivated one becomes the more these Ways become the norm.

It’s because each expression houses a vibration, and like a disease that simply can’t exist in certain environments, there are human expressions that cease to exist when operating at a certain vibration.

Not only do they fade from your lifestyle, but you also begin attracting people who are of like-vibe.