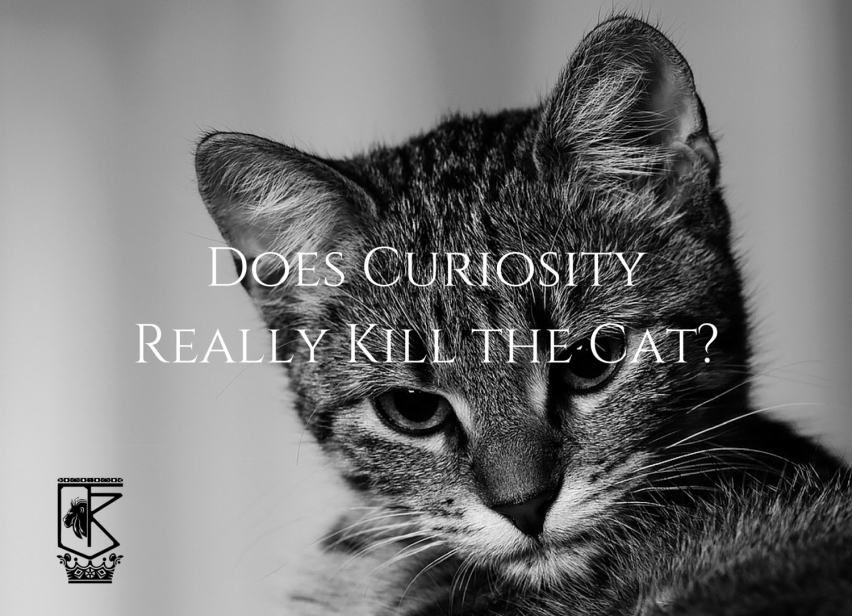 The gray cat felt some hesitation making the move. It would’ve been the first time he ventured off the second floor in the house he’s always lived in. On the second floor were lovely “parents,” the adult humans who adopted him many years ago. And there was one young girl he liked to play with from time to time. Although sometimes she could annoy the hell out of him with her smiling and giggling just because she enjoyed petting him right behind his ears. He did his best to stay cool, and she always happened to stop just before his claws came out. And then there was the amazing carpet he loved to roll around on and, when no one was home, scratch up in his discreet way. Of course no one would notice; he knew just the right way to pull at the material so it didn’t leave TOO many marks.

So many lovely experiences and he wanted to take this risk of going DOWN the steps to see what was on that first floor.

He was comfortable: food, affection, Me-time, a potty space and never had to worry about insects from outside living in his fur. So why would he want to take the risk of leaving it all just to see another space?

Curiosity. The cat simply had to know what was going on down there. He heard voices at night. Beings talking and walking around and stuff moving. His heightened senses alerted him to all of this. Now that he knows, he cannot forget. He needs to understand and see it for himself.

The cat knew there was potential danger. There might be monsters on that floor or one of those hairy beasts that bark and always chase his kind around. He could be torn to shreds! But he had to know.

So, one day, when the front door was left cracked open enough, the cat snuck through and ventured down the steps.

One after another, the cat’s heart pumped stronger, faster, closer to pushing out of his chest. His imagination continued to replay all those dangerous scenarios from earlier, all with him ending up being mangled. But he had to know.

Finally at the bottom of the staircase, the cat saw the front door was open to the first floor and he quietly walked in.

Then he saw it.

The hairy beast standing in front of him. It wasted no time closing the gap and the cat hissed, prepared for battle and to die.

The hairy beast just smelled and licked him on the forehead and left him alone. The dog walked away. The cat felt confused and continued walking in. The space looked a lot like what he saw everyday: couches, chairs, lights, some digital screen that had stuff moving on it, and finally another being with the two legs like his parents. She spoke in a soft tone, bent down and picked the cat up. He really thought he was going to die now. She was going to trick him into staying then chop him up for dinner,  or toss him outside with the insects and locked out or…

The woman eventually walked to some room where the cat saw one of his parents. It seemed like they knew each other. They were friends and that quickly relieved the cat.

With nothing more to fear and the cat’s curiosity fulfilled, he thought: what’s next?

Curiosity doesn’t always kill the cat and a lack of curiosity can kill people.

There might be several points to gleam from the story but ultimately we see the value and necessity of curiosity. This quality ingrained in us isn’t a simple “I just want to know,” but a deep, penetrating need to understand our world, ourselves and what we wish to make of ourselves in the world.

Curiosity is an integral quality to learning and should be valued outside the classroom as much as inside. It’s beyond academic studies and taking tests. It’s a signal that we don’t know something and desire to seek the truth.

Everyone’s strength level is different with curiosity but I believe we can always make it stronger. It will do wonders for personal growth like:

– Encourage us to learn more.

– Challenge us to never settle.

– Push us to expand our horizons.

– Make us feel like we have more purpose to live.

– Expand our mental dimensions and of what’s possible.

– Entice us to ask questions, which feeds the curiosity cycle.

– Reveal a level of humility because we’re searching for what we don’t know.

– Allow us to build a large web of knowledge connections.

When curiosity is strong it rarely sleeps.

It’s like a hungry beast with a belly that never fills and it gobbles up whatever you give attention to. There are times when my curiosity is so “hungry” that I read several books, articles and magazines and have YouTube videos playing, all at once. I spread the work out on the bed or desk and pick up one, read some, then drop it and pick up another, read and drop it while the videos are playing and I’m doing some kind of stretching or training exercise. When I remove this external knowledge and focus inward, my mind will tear apart these ideas and make connections with intensity.

I do not advocate this practice unless you’ve cultivated a balance of mind that allows you to work through information while remaining focused. It shouldn’t be a frantic experience, more like pointing a laser in one spot, gradually moving it to another and then another. The work here at iSuperThink.com will assist you in developing that kind of focus.

If you’re having curiosity-block or don’t feel that inspired to understand things beyond your immediate field, here are two suggestions:

Start small. Choose an interest you have, even if it’s not career-related or have financial ROI. That “interest” is a source of a curiosity. If it’s studying mosquitoes, then pursue it. Feel what it’s like to go into that field with blinders, you don’t know much and have your senses revitalized because of its newness. Don’t create a time frame. Allow for open, free-flowing, wild learning from any direction you want to take. Eventually you’ll develop a system that works for you.

Change your perception of curiosity. When you feel the urge, however small, see it as a signal that something inside of you wants to explore. it’s a drive that needs expression. If you ignore it, you’re really telling yourself, “No, stop learning something new.”