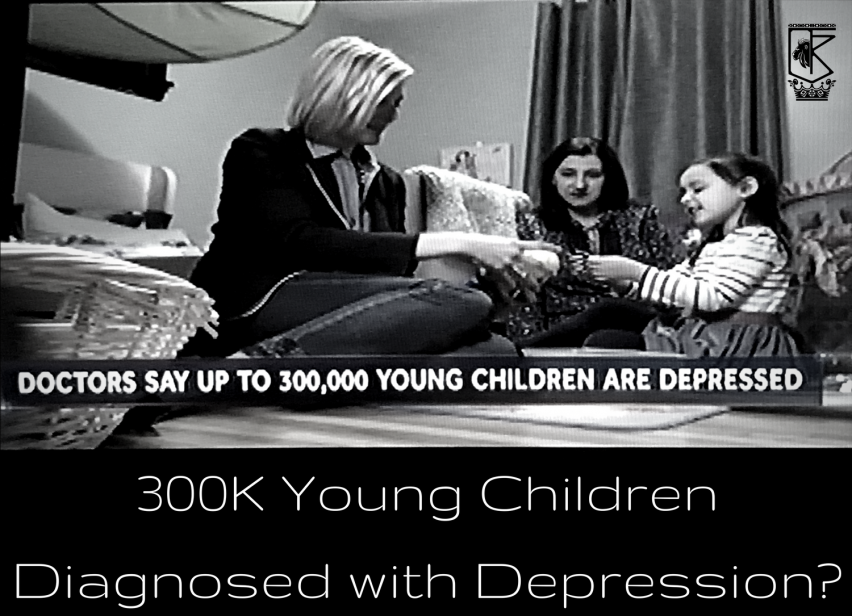 I don’t know about you, but seeing this headline alone touches my conscience in way that says, “This isn’t right.” This news story was covered on OANN news (interesting how the article for this report is not on the website). When we’re talking about “depression,” we’re referring to an in-depth clinical diagnosis that includes a number of side effects like:

Is something inside clicking for you?

These are heavy, energetic experiences that, for children, appear to be way beyond the scope of their early lives. With the exception of a few outliers (those outside the average), most young children are still developing their capacity to understand concepts like self-worth. What could be causes behind this large population of kids going through this? The news story doesn’t delve much into the roots. I suspect three situations could be happening simultaneously:

1. The diagnosis is being given too early. If this is the case, as premature diagnosis boxes the child into a category that comes with a few trappings: the child, being told or treated as a depressed being reinforces the behavior and thoughts of the diagnosis, thus fulfilling the manifestation. This occurs with adults and can happen without any kind of clinical diagnosis. Someone simply telling you, “Your drawing is horrible” can be enough to penetrate a susceptible subconscious, having you take that opinion on as truth. You then begin to live it out.

2. Trauma and inaccurate knowledge passed on to the child, creating the outward manifestation of depression. Here, the depression becomes a response to some form of abuse that trained the child to think of themselves with low self-worth. The abuse can be directly inflicted or transferred epigentically; in some channels this is called generational trauma. Wrong knowledge could look like offering poor nutritional choices that influence the child’s development or physically prolonged beating the child into submission to certain rules.

3. Children could be maturing faster and reaching existential crisis much earlier in life. If this is happening, we could say with time and support these children could eventually step out of their depressed state, just as the philosopher felt when first stepping out of Plato’s Cave; she gradually learns to adjust her pained eyes to the new light. In this scenario, the children “feel down” because they’re realizing the textures of living: physical pain, war, famine, suffering, destruction all while there is simultaneous joy, abundance, happiness, passion, love and health. Knowing the whole spectrum exists together can temporarily create a depressed experience, but as the child’s personal cosmology begins to build on truths, the child’s sense of worth and place coexisting in the experience begin to form. This process is halted or retarded when a drug to “cure” the depressed state is introduced. It potentially removes the burden, or self-responsibility of journeying inward to further understand the Self in relation to the world.

These scenarios are damaging to the child’s natural growth path, and as a species we do a disservice to the children we elect to label so young, whose worldviews haven’t yet solidified, whose sense of being is still in a naive state. Before we employ a label on someone, let’s first consider if it supports evolution or stagnation.