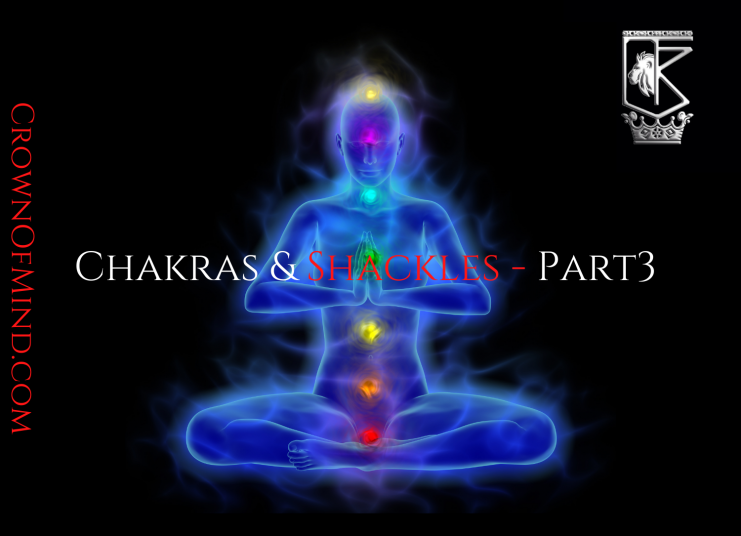 This chakra is all about sight and time. We’ll go backwards to the throat after this one. I think it’s pertinent to understand this before touching expression.

Recall a time when you enjoyed an experience, perhaps so immersed in it the time felt like it flew by. And the opposite, where you couldn’t wait to get the hell out of where you were but the time seemed to drag on.

If someone had a watch and tracked, the digits on the device would see no difference in time’s speed. It moved the same for both the high and low-enjoyment experience. But your internal sense of it shifted based on perception.

As an outside observer who gets to see many people on the verge of receiving job offers, I witness this phenomena often; the time moves like a snail for them. “When will I get the call? Should I follow up?” Meanwhile not much time passed on my side.

Time’s relativity exists because all of what we experience externally is housed within our minds.

I dare you: think of an experience that isn’t from your own mind. Can you?

Every expression you communicate comes from within and interfaces with this “out there,” which then interfaces with our “in here.” If this is so, and the Kybalion’s been sharing “The All is Mind” for millennia, what truly do you know beyond your own perception?

Interestingly, folks in the quantum physics community continue sharing scientific “discoveries” like how there are multiple dimensions, and multiple realities existing. May they continue to pass the knowledge on.

What do multiple dimensions mean and what do multiple realities have to do with practical matters like attaining a college degree or buying groceries?

I invite you to fuse the two: a “reality” is a “dimension.”

A dimension is one way of saying a perception level. The level you perceive with demonstrates thinking capacity.

For example, if you completed high school and never had the thought you could attend college and acquire a degree, you won’t be able to perceive the possibility. Getting a degree isn’t “real” for you because you don’t perceive the reality. Therefore your actions in the material world will reflect that.

If you go to the supermarket weekly and it never occurred to you to buy fruit instead of junk food, it doesn’t matter how many times you pass the fruit aisle. The possibility of the fruit ending up in your cart isn’t there because fruit as your grocery isn’t in your perception level. An intuition (inner teaching) would need to emerge for you, or someone along your path introduces the idea to you. Otherwise, fruit in your refrigerator at home isn’t a reality. Therefore you cannot see beyond the dimension involving junk food.

Thinking possibility and limitation: it’s a dance between being stuck in a reality or having the freedom to enter another. Since your mind creates your reality in the literal sense, the main accountability for our experience of some limitation has to be settled within. Once the work inside is done, our “out there” will reconfigure to conform with the new thinking level – the new dimension.

My emphasis on reading is a solution to helping others expand their realities. With a book, particularly with fiction, you’re able to absorb new dimensional thinking in home’s comfort. And if you watch cinema with a critical eye, you can use shows and movies as well for expansion. I remain fascinated by just how much illiteracy and aliteracy we have in the U.S.

Aliteracy is quite the new thought form, with people exhibiting pride about choosing not to read.

Another way to examine the purple chakra is through points-of-view. The more POVs you can access, the more understanding you have about an experience, the stronger your intuition, the better you can make a decision because you can foresee what might occur. The foundational cognitive ability here is prescience, or foreknowledge.

Those who know understand this power is most potent within the conscious mind when awakened.

Example: Imagine you walked down a usual street, on the way to a destination. A person you don’t know accidentally bumps into you. They’re angrier than you are and shouts an expletive. In this experience you have a small window to respond. Your response depends on how many POVs you can enter.

If you live by the impulses and just react, you might shout back and end up in some unnecessary fisticuffs.

If you have multiple POVs, or access to multiple potential realities, you can foresee taking different actions including:

In martial arts layman’s terms, we call this having “street smarts.” Knowing how to win without fighting.

Your response depends on the kind of outcome you’re comfortable with.

The consciousness community likes to go into numbers with these dimensions up to 12D, etc. For purposes of where we are right now as a collective, 3D and 4D ought to be primary focuses.

3D deals with material reality, how to navigate it. That means everything from the red to orange to yellow chakras: survival, being creative in the world, developing a healthy self-esteem.

From the green chakra upward we’re dealing with capacities that need to be “turned on” through active, deliberate development, although some are gifted with these already switched on.

The 4D realm deals primarily with time. In the purple chakra we learn to understand how to collapse (shorten), expand (lengthen) and shift (jump time to acquire understanding faster) timelines. Each of these deserves its own writing piece.

If no one’s told you, time is the ultimate wealth next to health.

Without these two, all other wealth forms are null. If you had 10,000 years to master a business industry it wouldn’t matter if you failed 100 times. Eventually you’d become successful.

And it wouldn’t matter if you had 10,000 years to become successful if your health was failing the whole time. I encourage you to treat these two like you would whatever you treat as sacred now. Now treat it more sacred. Waste no time. Waste no drop of health.

A fantastic book called The Melatonin Miracle will present to you the tangible connection between time and health through the pineal gland and melatonin. That famed gland is considered the actual third-eye in your brain, all with the capability of being photo(light)-sensitive.

Why would something inside your brain be able to recognize light?

Light is knowledge in vibration form.

When your vitamin D levels are low, you’re encouraged to go out in the sun because the sunlight-information stimulates chemical reactions in the body. All to strengthen bones, raise the sex drive, empower the immune system and elevate mood-healing hormones among other reactions.

The book will show you how this pineal releases melatonin at specific times in the night, which has a direct influence on how our bodies age. The pineal is also considered a “stargate” because of its relationship to light, time and perception. The Yoga of Time Travel will offer some quantum physics science with meditation-based practices to help you understand how you can use this Stargate.

We can recall an influential philosopher’s words here, “Be the change you wish to see in the world,” can be rearranged to say, “To change the world you have to first see it, then become it.”

Croods is a cool movie that illustrates this difference between the realities. A genius homo sapiens shows up with his new ways of thinking and meets what would appear to be a Neandertal-type family.

With different brains, different development and access to dimensions, you can see how having more POVs makes a person more powerful. In the case of the human species, Homo sapiens sapiens is the dominant on this planet precisely because of thought-evolution, insight, intelligence, prescience. Purple chakra.

To think on different planes, to be more creative, the brain needs to be rewired. You do it by challenging it with knowledge that forces point-of-view shifts. Genetic and mental change.

If you can name a book or experience that, once you had it you never saw the same again, this is the experience I’m describing. That’s a POV evolution.

In the past, enslavement was a physically-demanding ordeal. To compel people to take action they didn’t want to take, threatening with physical harm was most useful. It ensured the desired outcome.

Burning down homes, rampaging villages and towns. Ruining infrastructure. All ways to bring a group into submission. But this is also costly for the attacker. They risk their own life in physical altercations, could lose members from their own group. Going to war even locally could uproot resources from both sides.

With material technology’s advancement, you can observe these kinds of battles are less frequent, more focused around the world. Our global connections are set up in such a way that one worldwide war event could end the ways of numerous countries simultaneously. Warmongering has become a more calculated affair.

And so has enslavement. Mass-attacking a population is too obvious. Horrible optics considering how fast scenes can show up on sites like YouTube. So the activity had to become subtler, more covert, reducing as much physical effort as possible. Could it be done without physical effort?

Yes if you can enslave the mind.

There are several ways this is done energetically.

Because enslavement strategies are more mental today, it’s very important for your consent to be involved. It’s much better for you to voluntarily make yourself the sheep rather than be forced. You need to be the one to sign on the dotted line in the contract. You have to accept the contract.

Some ways you’re taught to self-sabotage the purple chakra: