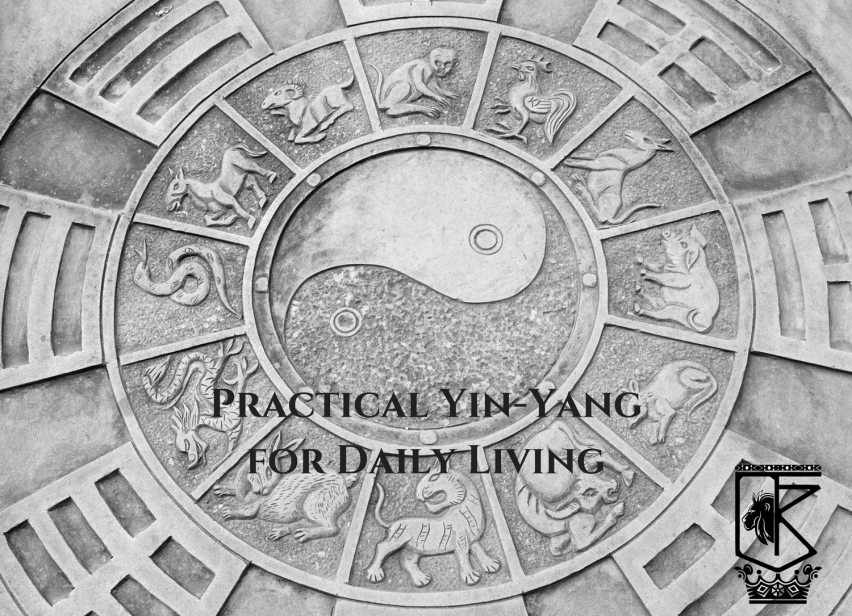 The above image is one of those iconic symbols all may recognize when seen.

“Ah I know what that’s about,” still others may reply, “It’s that man-woman opposites attract thing.”

I’m not going to dig into an answer; they all touch on aspects of the symbol, which are nuanced manifestations of what are called yin and yang.

While “yang” is the light half and represents the principle of: activity, focus, precision, goal-orientation, aggressiveness, building, application, directness, logic, order.

A common misconception we tend to develop when we look at qualities like these is making comparisons. Which is better? Which one should we be more like? Which one is weaker? Which should we strive for? This truly is a western orientation that focuses on harnessing the competitive, dualistic nature. But yin-yang is beyond our human-made constructs; the principles exist in all of creation. Rather than being a one or the other, yin-yang manifests by flowing: yin qualities transform into yang qualities that transform back to yin depending on the situation. We too have these qualities within as an organic mesh, a blend that changes when the time is needed, or when we least expect.

Men have yin energies and women have yang energies. How they manifest may be different, but self-reflection can show us that we’ve experienced times when strong focus was needed, while other times it was best to do nothing and just allow the inspiration to touch us. Or when we aimed to complete a long-term goal and other times wanted to just enjoy the moment.

Since volumes have been written on this subject matter, I refer you to one of my favorites: Between Heaven & Earth: A Guide to Chinese Medicine by Harriet Beinfield and Efrem Korngold.

Here I will cover practical yin-yang manifestation. The “practical” aspect of something is the use of that thing, the crystallization of it so it can be applied in mundane ways.

Practical guidance is an important-yet-often neglected area I notice in some self-help / self-development arenas and why I advocate to be weary of ivory tower gurus. Self-indulgent gurus will spew platitudes and beautiful language that induce you with feel-good sensations, but at the end you are left devoid of any true ways, paths or exercises to make their principles applicable, that is, practical. You just know by the end of the experience, you feel very good. Michel Rostand, described in the documentary Holy Hell, masterfully accomplished this. The trained hypno-therapist applied his skills to create a cult that felt amazing in the beginning and destructive over a period of decades. The members of his group were brainwashed, they couldn’t understand how they ended up in that state after leaving.

For you, as an empowered learner, questions that prompt practicality can be:

“How do I take this high-powered idea, like overcoming attachment, to a level that allows me to actually feel what that’s like in my daily life?”

Another: “What does overcoming attachment actually look like when someone is living it?”

We can spout “Overcome attachment!” all we want, but it’s not real for us until we can activate that state in daily living, not just at retreats or ashrams or secluded temples.

With a general idea of what yin and yang are, let’s look at how they can influence our day. We’ll take a normal, fictional character, Raymond Oswald, a workingman and observe him living for a day.

7:30am: Raymond hears his alarm. He had a deep dream about going to a carnival that allowed him to join the circus crew. He somehow ended up in a blue bunny outfit and the rest of the team was also dressed like animals: a rooster, a panda and a Capuchin monkey. His job was to do something called the Hop Man 2020 (Dreaming, Yin).

7:32am: Now awake from his dream, interrupted by his alarm, he feels angry at the loud sound and pushes it off the dresser. It falls on to the floor. (Aggression, Yang).

7:45am: Raymond does his quick routine and a basic workout stretch. He works up a sweat that makes him alert, gets his blood flowing and feeling confident about the day. (Activity, Yang).

8:15am: Done showering, Raymond gets dressed. He speaks to himself in the mirror. “Affirmations” he calls them, so he can focus on his goals and not become distracted (Assertion, Yang).

8:16am: He is suddenly hit with an intuitive hunch. The idea came to him and connected to his dream. (Intuition, Yin).

9:00am: Raymond feels excited about his new idea (Ecstatic, Yin) and wants to share it with his manager (Activity, Yang).

9:30am: Arrives to work and sees there’s a surprise meeting. Maybe an opportunity for him to present his idea? (Openness to Opportunity, Receptivity, Yin)

10am: Finds out the meeting is about a collective raise. Raymond feels excited (Ecstatic, Yin). The team claps and feels positive about the announcement (Ecstatic, Yin).

12pm: Raymond goes to lunch and stands on line to buy his food and sees the woman in front of him having trouble buying. She can’t find her money. Raymond empathizes (Yin) and offers to pay for her meal (Assertiveness, Yang). She says, “It’s fine,” and he smiles going forward anyway (Persistence, Yang). She thanks him and asks if he ever needs anything. He replies and says, “A conversation,” asking her to have lunch with him (Confidence, Yang). They eat together.

1:30pm: Raymond has been sitting at his desk for the past half-hour, debating about his ideas (Imagination, Intuition, Creativity, Yin). He feels hesitant about just walking into his manager’s office and bringing it up (Caution, Yin). So he sets a timer for himself. 5 minutes. In the next 5 minutes, he’s going to get up and go. He imagines the scenario (Imagination, Yin).

1:45pm: Raymond gives his presentation and feels confident. He maintains a positive flow, rehearsed from his many times practicing the speech. His morning routine kicks in at the right time, filling him with focus (Confidence, Yang). He delivers and the manager loves the idea. Since he put it on the line, Raymond will be heading the new project next week (Sense of Accomplishment, Yang).

Raymond’s day can go on, like ours, and reflect these mini-transformations of yin-yang, when we’re exerting or on the receiving end of some idea, person or thing. Since our western, boxed mindset tends to apply comparative values on things, one might continue to ask, “Is it better to be yang or yin? Which is good or which is bad?” The answer, dear readers, is both, both and more of both!

Whether man or woman, we can learn to consciously hone these energetic flows, understand our circumstances and then use the appropriate energy for that moment, like we would use a specific tool for a specific job. Sometimes a push is needed when we’re trying to pull, and a push might not be needed when we can just pull.