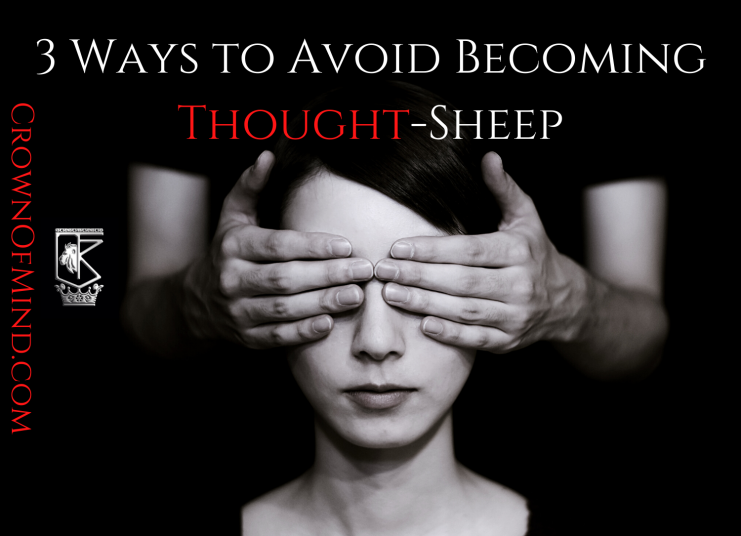 What can be more dangerous than a physical attack? A mental one of course.

Subtler and intangible, a mental assault can do its job in seconds, quietly penetrating the psyche, weaving into the mind as an idea, latching onto the host’s intellect. Contorting the emotions.

Those familiar with the Naked Brain know conglomerates have been at this game since the dawn of time; knowing the pen is mightier than the sword, and the word can be mightier than the pen, people studied for millennia about how to create thought-sheep.

What’s a thought-sheep? A mind that blindly follows its thoughts.

Like the animal sheep has a dog or shepherd to herd it, the thought-sheep also has a force that herds it, accomplished through archetypes, concepts, ideas and manipulated knowledge.

The goal for both the animal and thought-sheep is to be steered in a specific direction.

Where is that direction? It’s up to the shepherd.

Here are 3 ways to avoid being a thought-sheep:

One potent way to avoid becoming a thought-sheep is to eliminate toxic information silos.

This is creatively illustrated in the documentary The Social Dilemma; these silos are cognitive and reinforce values or beliefs within a community, simultaneously blocking those contradicting. Seasoned researchers will remember the Jonestown incident involving fatal info silo consequences.

While connecting with like-minded people and existing within value-affirming communities can make for enhanced quality of life, these thought-sheep cognitive silos exist to the neglect of correct or empowerment knowledge. They are self-destructive rather than self-liberating.

Like the people in Plato’s Cave who are afraid to turn around and leave for fear of stepping away from darkness and into light [truth], being cognitively trapped as a thought-sheep means you refuse knowledge that can liberate [produce mental/emotional/physical freedom] because there is greater comfort in staying within a space that embraces energetic complacency.

In Plato’s Cave, the person who noticed the shadows on the wall and ventured out of the cave experienced the light.

The eyes burned for a time, but eventually clarity became the norm; it was easier to see. Vision restored.

The cave can be so seductive that the dwellers would be willing to harm that person who left the cave. People in the cave are the thought-sheep.

To further understand your own ideas and ensure you’re not thinking sheep-like, explore ideas that challenge your own. This doesn’t mean to automatically change your ideas, but when you learn about an opposing perspective, if your position is truly strong or the truth, it can withstand whatever you come across and actually strengthen your position, because you know why you disagree with the other and agree with your own.

If you find yourself talking about ideas, positions or holding arguments and unable to articulate your why behind these positions, it’s possible you’re operating like a thought-sheep. It means these ideas were implanted into your subconscious through some medium like television, hearsay or an unexamined conversation.

This is more prominent today and we can partially thank social media for it. Of all its benefits for collaboration and streaming ideas at near-lightning speed across the globe, it lacks the instruction manual necessary for proper reasoning.

A one-line Tweet, Instagram or Facebook post is not thorough enough to deliver a complete, complex concept. That responsibility exists on us to receive a piece of information and research, or perform the inner work to explore why we agree or disagree with it.

Examine your own ideas; invest time to challenge yourself with your own Why for believing or for agreeing to something.

One of the more challenging concepts to overcome is equating feeling to the truth. Feelings have a tendency to be fleeting; they shift, wane, fluctuate, change and tend to manifest based on how we’re thinking at a given time.

If someone bumps into you accidentally and you’re led by feelings, your response may be determined by how you’re feeling in the moment. If your day was generally enjoyable, you may let it slide and acknowledge the mistake. If you’ve had a series of irritations that day and someone decided to bump you, already being triggered, you might lash out.

If you think living by the feelings exhibits the highest consciousness states, check out an example here of what happens when feelings guide the action over a parking spot.

Ultimately, a feeling is information. It’s a signal indicating our mental state and they lack consistency; one person’s anger is another’s excitement, and another’s fear. This means perception, how we “see” an experience, determined by our core values generates the feeling within.

One of your greatest tools, weapons and fortification is the capacity to remain internally grounded no matter what’s happening around you. This is the foundation for true strength.

Organizations keen on this science understand how to play the masses’ feelings; consequently, they know how to provide the right stimulus that causes a population to behave a certain way. And just like the mouse running on the wheel, or the mouse placed in the maze guided by the cheese’s scent, this relationship between the triggered and trigger holder will continue until a population or person decides to self-examine what those triggers are, and how to transcend them.

One of my mentees is working on a UX Design project and would like to capture some views in the pet space. If you live with a pet, I’d appreciate your 5-minute commitment to fill out the survey here. It will go a long way to how the project develops, and you’ll be helping a budding UX professional on the career path.