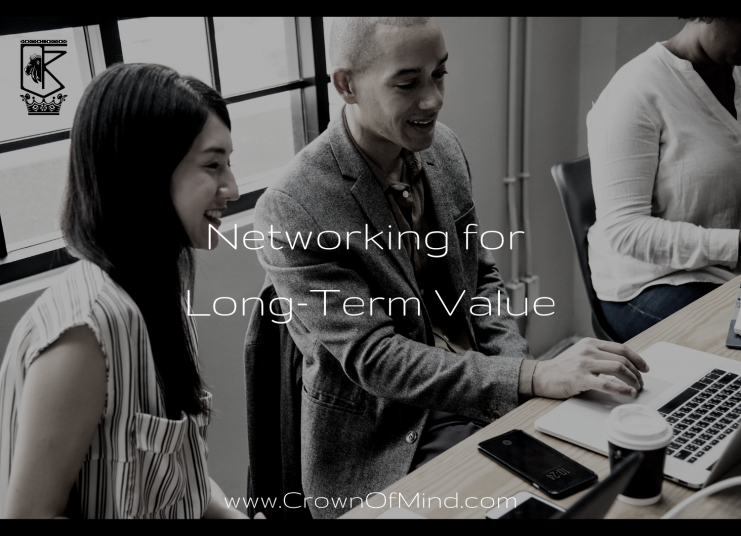 Imagine yourself at a networking event. There you are, dressed in your best professional clothes because that’s what the advertisement suggested on Meetup.com. You’re standing at the front entrance. It’s about 45 minutes after the event started; you didn’t want to be the absolute first one to walk in without anyone to talk to, even though you made it to the place several minutes before it started. Who wants to be the first networker at a networking event, right?

You look at your watch. 50 minutes after now. You hear plenty of talking, meaning there are plenty of people already engaged, interested in talking. Okay, time to move in.

Checking in was simple. Perhaps what felt not so simple afterwards was the holistic venue view: way more people than you expected and everyone is in a conversation. A few people are scattered off to the sides looking awkward and you don’t want to be that guy or gal. Nope, tonight isn’t about being that guy or gal, it’s about networking.

After you receive your color-coded name tag that instantly tells people what industry you’re in, an anxious rush suddenly comes over you. A few people walk by. You smile; they smile, check out your tag and then keep walking. It was as if your color repelled them. You have the feeling they just checked you out and weren’t interested because of the tag.

Time passes and you’re engaged in conversations, but for some reason they continue to feel stale, surface-level, disengaged, like a transaction.

This is the typical networking experience.

What is Networking Really?

Networking in its classical sense is a skill that matches people so they can connect on some level. Events similar to the previous scenario try to help people connect but there are mindsets that can act against creating these kinds of connections. Sometimes the process can take on a more selfish form that I want to highlight in this article so we can develop better best practices and network anywhere we go.

When we network successfully, our “net” is wider and it starts “working” for us in some way. Networking in its true sense is about people forming connections that mutually benefit each other: all party members’ “nets” expand because we’re all “working” for each other, to support each other’s goals.

I observe here in the metropolitan area that the fast-paced environment tends to generate an immediate gratification or a what’s-in-it-for-me mindset. It makes sense for some situations; time is important and the shortest route to the train can be the ideal choice. But this can also influence how we communicate with each other; a conversation can become just as rushed as the train station journey, “Just get to the point!”

This can cultivate a transaction-communication style where we only speak to people when there is something to be gained, taken or achieved. Determining who to talk to, we can start sizing people up by outer appearances only or a few words they share. If the criteria don’t fit, we refuse to interact. The other person is no longer one to know but to attain a goal from. Not only can this make the other person feel uncomfortable, it sends a signal that we’re not about networking, only taking.

The Importance of Offering Value First

Whether meeting a new professional contact or just making a new friend, I find that offering something of value first, without expectations of receiving something in response helps to create a solid bridge in the relationship. The offering can be a piece of information, resource or skill I have or acknowledgment of something they do that I recognize. This can prompt someone to want to return the favor but it is not necessary, as the first act is like a stamp on a new document to seal the connection with integrity.

Offering value first can conjure thoughts of, “Why should I do that first? No one ever gave me anything first! I always have to ask!” If these thoughts show up, acknowledge them as a space to evolve beyond; the defensiveness is a return to the self-focus mentioned earlier.

Offering value first without a prompt raises the networking relationship’s strength tenfold. It says you have an abundance of value to share and not concerned about losing something by giving.

In my consulting I recognize this is one of the biggest challenges. People who have been in business for years and have large social media followings can still struggle with this one question. Deeper than just being good at something, knowing our genuine value as a human being speaks to the core of our self-esteem, our life purpose.

If you’re feeling blocked from offering value first or at any time because you don’t know what value you have, this is a great time for some introspection. 2019 is here and committing to a few hours to write down answers to these questions can help you target:

Once you have a list you’re comfortable with, see those answers as values you have to offer. When you meet someone, think of how what you know, do or could share could add value for that person.

There are many places to network given our global environment, so I will list categories rather than load up with tons of sources. The reason is because networking is a skill; once you have it, you can execute it in any environment.

Tips to Keep the Net Working

Have consistent communication not only when working on projects. I cannot stress this one enough, if the goal is to grow the relationship and whatever you’re building together. The more you talk about subjects that aren’t project-related, the more you know each other’s personalities, build trust, interests, strengths and can become more targeted about where exactly your value can assist the team.

Remember that major business decisions generally aren’t made sitting at a formal table where all view it as work. They happen on the “golf court,” while the partners are playing a game or out at a dinner. I’d say 96% of my professional moves were outside of the formal work environment.

Create an environment for open communication & idea exchange. This sounds a bit formal but it reflects the previous tip. Take initiative to set up lunch meetings, phone calls, activities or some space where you can exchange ideas that don’t immediately result in action taken. The interactions are meant to cultivate synergy between you and the network rather than get to business.

Be curious about the other’s interests. See this curiosity about your network’s interests as an investment. The more effort you put into it the more returns will come to you.

Let’s say you meet Jane Doe at a park event and you exchange contact info. Then you set up a time to meet for lunch to discuss a potential collaboration. You helped her by offering a resource for something she’s working on personally. You discussed the potential project then ended the meeting. A week later you receive E-mail from your new contact giving you a lead on something you said you were working on personally. That lead quickly solved your problem. Your return came to you.

Now imagine you have a network of 10 contacts looking out for you as you’re looking out for them. Then imagine how fast your goals could move if you had 25 contacts all working the net in some form. Quality over quantity of course, but I hope you can envision this.

Instead of “always be closing,” I like the idea of “always be networking” because it’s the same as saying, “continue to build relationships with people.”

Since we’re an interdependent species, we will always need the various skills, abilities and experiences provided by a community, and communities are built upon relationships, and relationships are developed through networking.

How to Build Credibility with Testimonials - CrownOfMind.Com

[…] This is critical especially if you’re just starting out as a professional. Testimonials are statements that describe a direct experience of working with you. It’s the quote or few lines that confirm the successful value you offered. They hold strength because they show you can take a client through the full value creation cycle: meeting, communication, problem assessment, problem solution and the long-term relationship. […]